Not Lu here: Notice the following in the image below. Sipper cup – check. Comfy jammies – check. Warm socks – check. Phone and thumbs for writing book 2 in Common Among Gods – check. 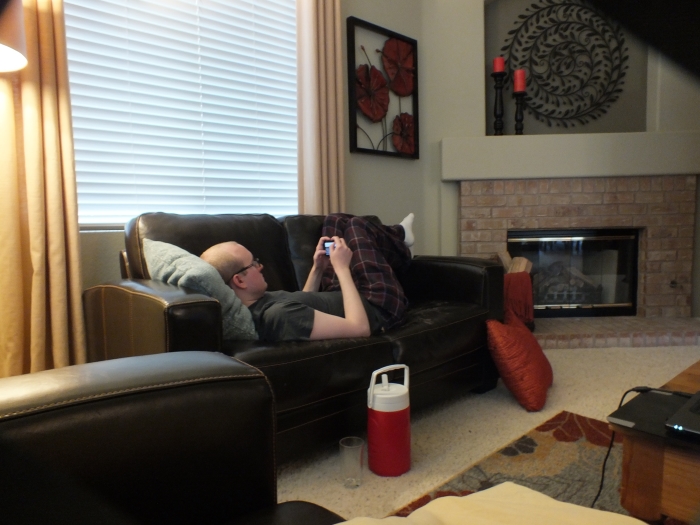 Justan just gave me the good news that he’s written 176,000 words and 28 chapters in book 2 of Common Among Gods. You can imagine my delight that he’s over 40% of the way done… except he probably isn’t.

I promptly gave him a beating and sent him to his room without dinner, in part to nurse his wounds but, mostly to think about disciplining himself and just getting book 2 done.

When he emerged from isolation and humiliation I asked him if he could tell me what he did wrong (that’s our rule for getting out after being sent to your room – no time limit – just come out when you can explain your failure in detail). His response was, “I know it’s too much, but it’s all really good stuff.” Yeah, right. As if any of us believes that!

But being the better person that I am, I decided I’d listen and see if he could explain his problem. It turns out that in ONE HUNDRED AND SEVENTY-SIX THOUSAND WORDS (about 75% longer than most books), the neerdowell spawn hasn’t even gotten Sybil out of the university and looking for Just. “Seriously? Isn’t that kind of the promise of book 2?” I asked.

At this point, I gave up and said, “Well, we’ll just have to do what we did with Death’s Merchant. You just write it the way you want, using as many words as it takes, then we’ll send it out to your beta readers, they’ll tell you how bad it sucks, then you’ll strip out what you have to, then add what you have to to make it readable.”

“Sounds like a good plan. Can I come out of my room now?” he responded.